When decorating sports bedroom ideas, it doesn’t actually matter if the sport has the most famous players or not; actually, it all boils down to which sport the child prefers to be in his sports themed interior design. If you have boys in your family and you can’t decide which design ideas suit them, choose among our collections.

Boys of all age groups, whether young or old, love sports. So, creating a sports themed room for your boy is definitely a great idea. Although it can be really daunting, the results can be really fulfilling. Besides, boys love anything and everything related to sports like baseball, hockey, football, cricket and even Judo Karate. But it would be greater if you know which sport he likes best and have it all in his bedroom. However, if your child lets you choose the sport and you can’t decide which one to pick, don’t worry. Here are the five most popular sports bedroom ideas for you to gain inspiration from. 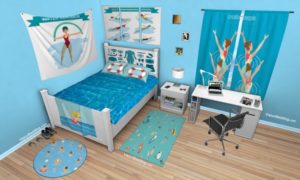 Although it is not the most popular sport in the world, swimming is famous when it comes to bedroom ideas. The fact that both boys and girls are really into it supports that claim. With its shade of eye-pleasing cool blue colors, who wouldn’t want to have swimming as a theme for their bedroom?

Imagine having a curtain filled with white clouds and blue skies giving a calm and peaceful ambiance in the room. Or a duvet cover with an image of the water in the pool in it. Or a wall tapestry and canvas wraps that display the different strokes of swimming. The designs in that sports themed bedroom is likened to a synchronized swimming team giving such a brilliant show to the viewers. Likewise, a bedroom filled with harmony will definitely impress every visitor that would take a step into a swimming-themed bedroom.

You don’t necessary have to be Kobe Bryant or LeBron James to have a bedroom filled with basketball items. Also, you don’t have to be an all-out fan to enjoy basketball-themed bedroom ideas. Honestly, the way the bedroom looks is really attractive even to those who don’t have much knowledge about the sport. And a lot of people likes such design no matter where they are from or what sport they’ve grown up knowing.

A window curtain displaying patterns of gears related to the beloved game will definitely immediately spark one’s interest. Or a duvet cover rocking a basketball court, imitating the real one could definitely spike someone’s imagination. Rugs that portray basketballs on them would encourage someone to never stop playing the game they have grown to love. 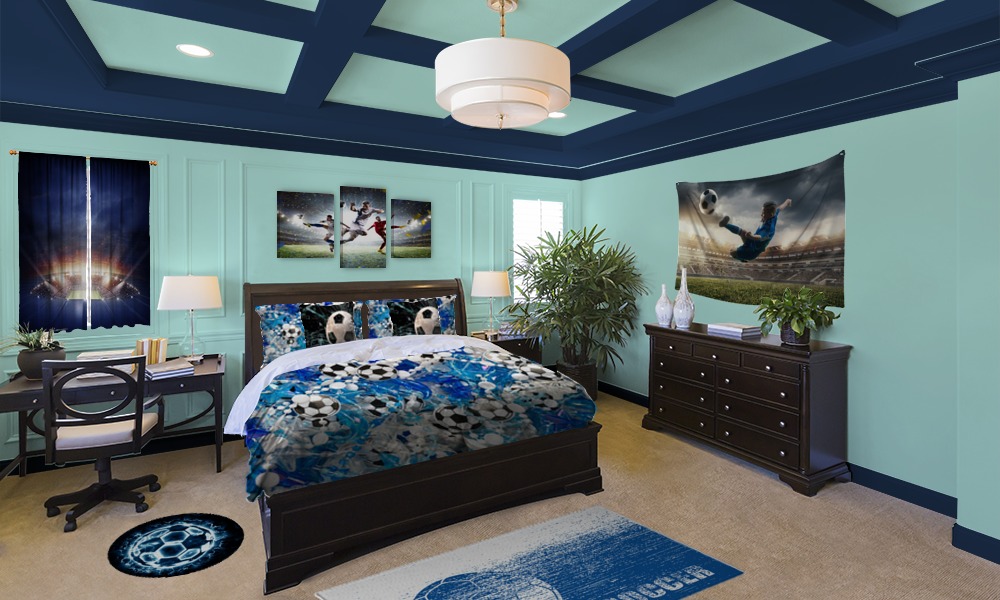 With almost 3.5 billion fans around the world, there is no question why soccer is the most loved sport in all of the world. In line to that, there is also no need to wonder why my most people would have a soccer theme for their bedroom. It’s also one way of showing support for their favorite team. One could have a sports themed bedroom design that is solely dedicated to their favorite side. It could be that they’d have a customized window curtain displaying their players in a photo in the field, or probably a duvet cover that showcases the green field where they play the sport, or a wall tapestry that displays different kicks and stunts that one can do when playing the sport. There are lots of ideas that one can do and create in a soccer bedroom.

Contrary to the stereotype that mostly women participate in gymnastics, studies show that there are also a lot of men who loves to display their balance, strength, flexibility, agility, and more through the sport. Unlike the other sports with a majority fan base of almost all men, gymnastics spreads out to everyone, but still, mostly women, with a global reach. There are a lot of impressive and creative ways to decorate the bedroom with the gymnastics theme. For example, one can have an image or a graphic illustration of a gymnast doing a very complicated pose on a wall art, or probably a set of tools and gears used in gymnastics designed on a window curtain, or probably a breathtaking photo of a gymnast performing on a balance beam. That would definitely look incredible in a bedroom, without a doubt. 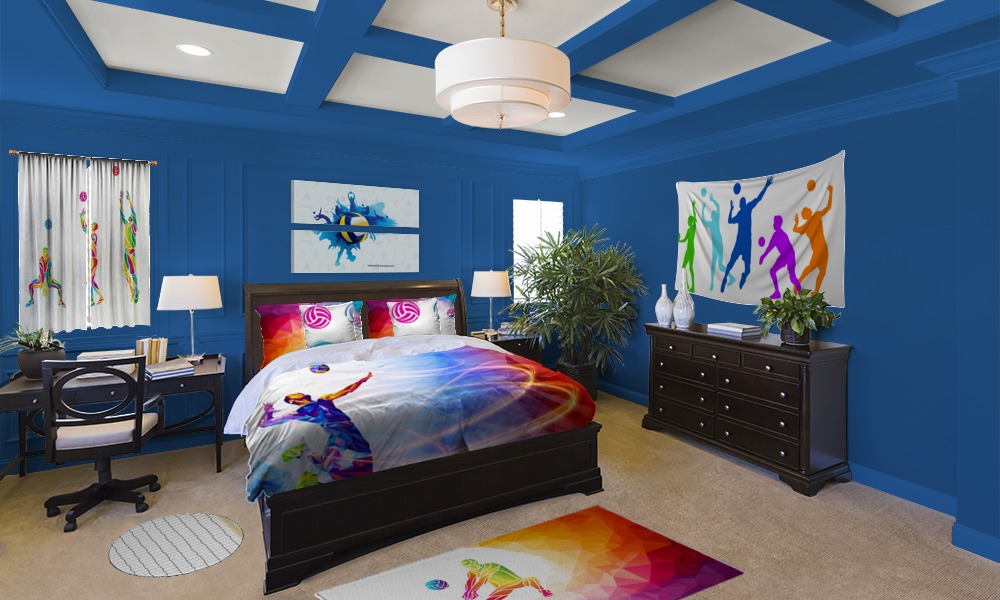 The thing about volleyball is that it is an outdoor sport, and when you have such an Al fresco look inside your bedroom, it would create this beautiful ironic interior that far exceeds the norm of the mediocre way of designing a room. When you think of volleyball, you may even think of a game that is played on the beach or somewhere under the heat of the sun, perfected by the heat of the game between two teams.

Just imagine a dramatic spike of a player, locked in midair, captured in photo and made into a duvet cover; that would most probably send chills down your spine every time you see it. Or having a graphic illustration of a beach volley ball in both of your area and round rugs. You can even chime in an intense heat of the sun glaring its rays at the players as it is displayed in your custom size window curtain. Just think of all the possibilities that you can create in your bedroom when you design it with all things related to volleyball.

Whether it is for you, your son or daughter, or someone you know who loves to have a sports themed bedroom, the most important thing to remember is to know the particular sport that they are into. You have to learn their interests so you know which items to have. When picking a design, keep in mind to have the colors coordinated so as not to make a mess of the harmony inside their bedroom. When you have all that perfected, you can transform any room into the best sports bedroom ideas that you’ll ever see.