Zombie Ideas For Decorating A Bedroom Fit For the Undead 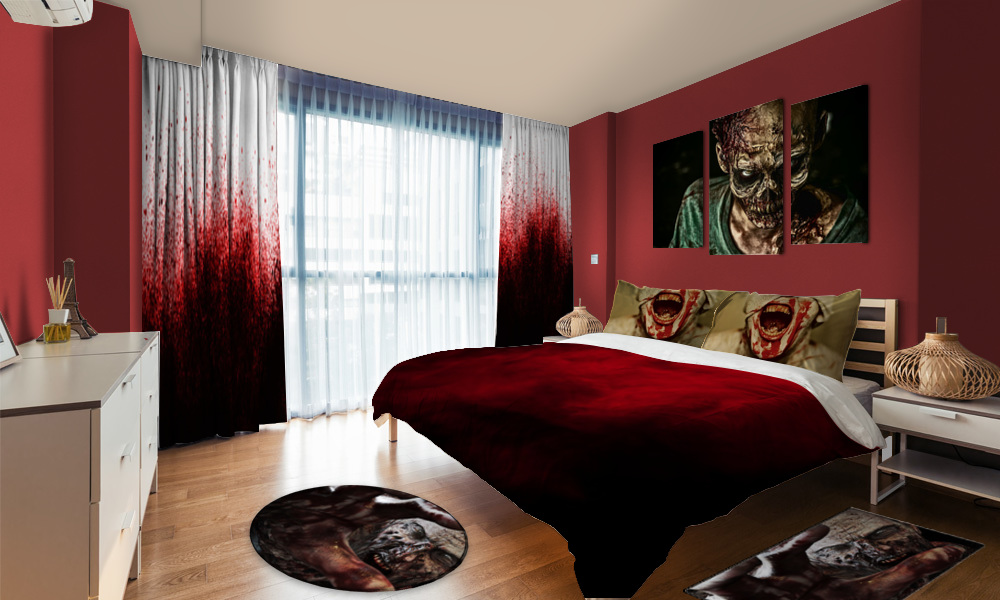 Whether you’re a die-hard fan of the Walking Dead or just really obsessed with horror films, making your love for zombies a part of your daily life is pretty simple. Decorating your bedroom with zombie decor has all the perks of being surrounded by the flesh-eating creatures without the fear of actually having to escape them. From deep, bloody red colors to random limbs laying around, this blog will show you how to construct the bedroom that will be begging you to put up caution tape by the time you’re finished.

They crave the taste of the living, they’re often covered in blood and sometimes, they’re even seen with other creatures of horror. With all these characteristics, there are plenty of options for decor to show off your zombie adoration. These eerie zombie themed bedrooms can bring a whole new life – or lack thereof – to your bedroom. 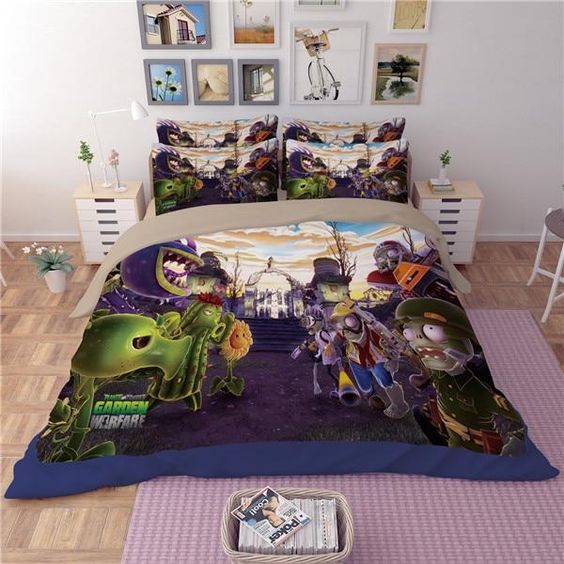 A simple rule of thumb when decorating any bedroom – even a zombie bedroom – is having some consistency.  In this zombie themed bedroom, matching the comforter and the pillow cases adds some organization. There is a lot going on in the Garden Warfare graphic that is printed on the comforter, but by throwing the same visual on other pieces of home decor, it makes the interior seem less scattered and chaotic. Plus, it just reinforces the owner’s excitement for the zombie design they picked out! 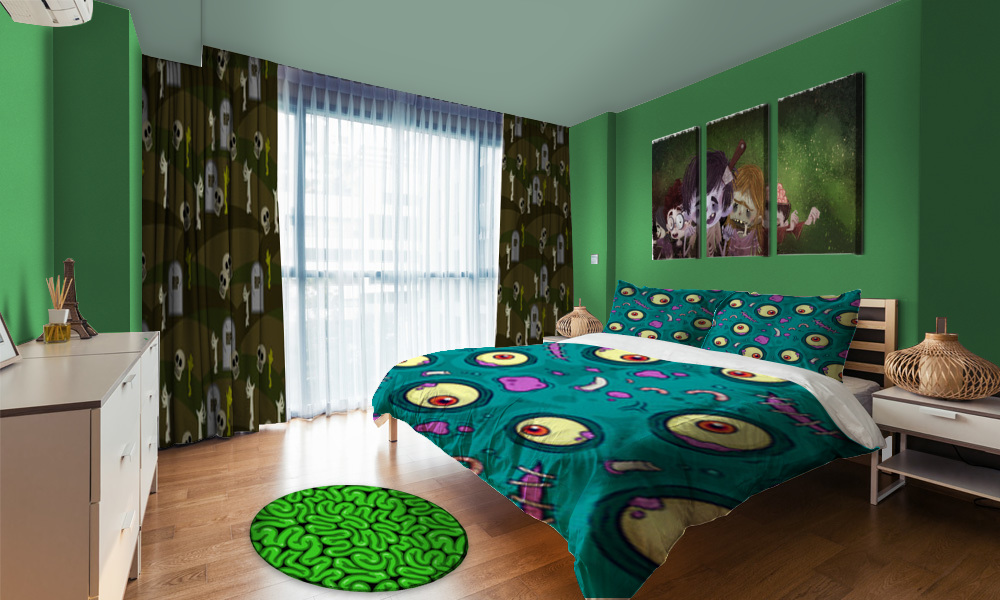 We mentioned that whole thing about spare limbs earlier and if you’re a true fan, you know that zombies have a little obsession with brains. In this unique bedroom, the undead theme is still obvious even those there aren’t actual zombies plastered all over everything. If you want to add a little creativity to your space, get decor printed with pictures of symbols that anyone would easily be able to associate with zombies.  The vibrant green brain rug and the buggy eyeballs on the comforter will make anyone’s toes curl.

If you’re a more subtle person, or just haven’t quite told your spouse about your love for zombies yet, one oversized piece of zombie decor will do the trick. The owner of this modern rendition of a zombie-themed bedroom hung a massive axe on the wall as a creative reminder of the man-killing monsters. Wall decor like this would work just as well as an addition to a completely decked out undead theme bedroom as well. 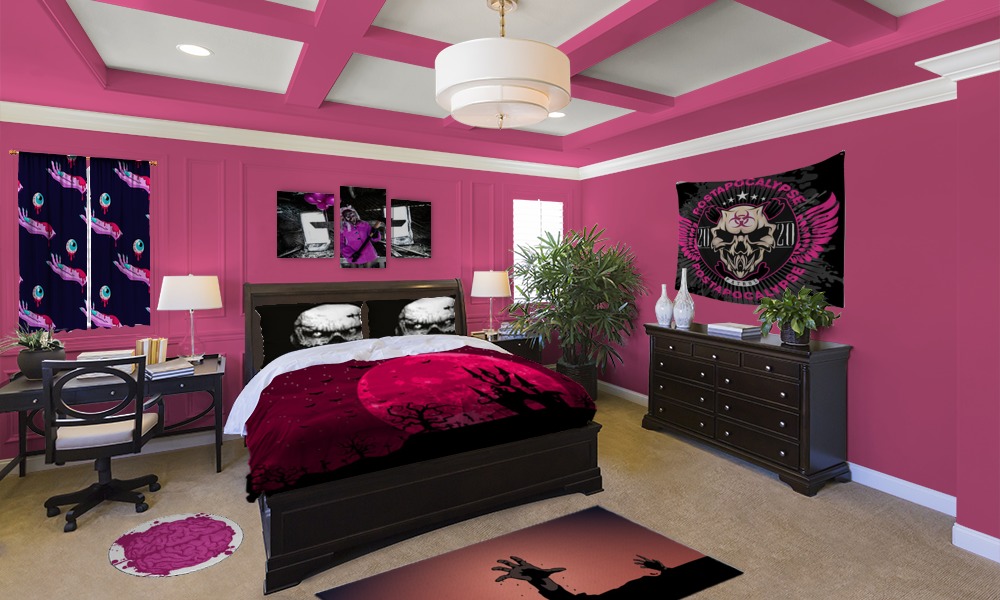 A key to a good bedroom is your favorite thing mixed with your favorite color. So, while a bloody red might be a go-to choice for every other zombie fan, your pink zombie-themed bedroom will be one-of-a-kind. Deep fuchsia makes for an eerie sunset or a fresh brain, both of which are much scarier than a typical and overused red.

If you don’t have the resources to completely redo your bedroom, but you want to display your undead devotion too, use one main decor piece such as a bedding set, like the picture above, or an oversized mural. Even if it’s the only zombie-themed decoration in the bedroom, it will most definitely be the most prominent.

Zombie lovers come in all ages, but sometimes for little zombie fans, the blood and gore may be enough to turn a cool bedroom into a nightmare zone – and not the kind we’re going for. However, with cartoon-style imaging and creative graphics, kids can also have eerie zombie-themed decorations in their rooms! 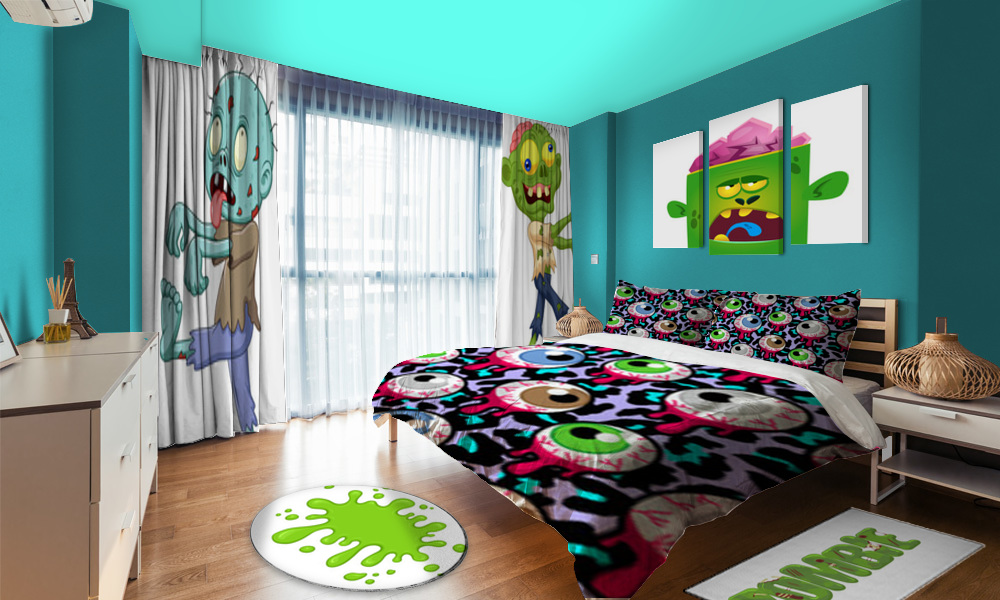 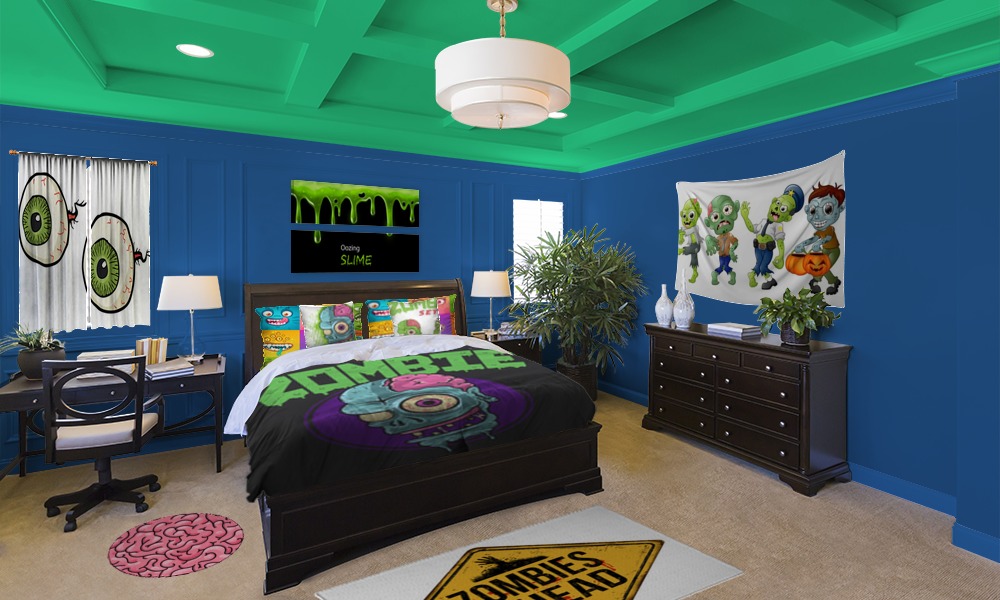 Using colorful and cartoon-like eyeball decor is a great substitute for any young zombie lover that wants to keep the undead represented in their bedroom. Creative rugs with vibrant pictures like the pattern of a brain, a splat of slime or a “zombies ahead” construction sign are equally creative ways to put together a room for any zombie devotee in the making. 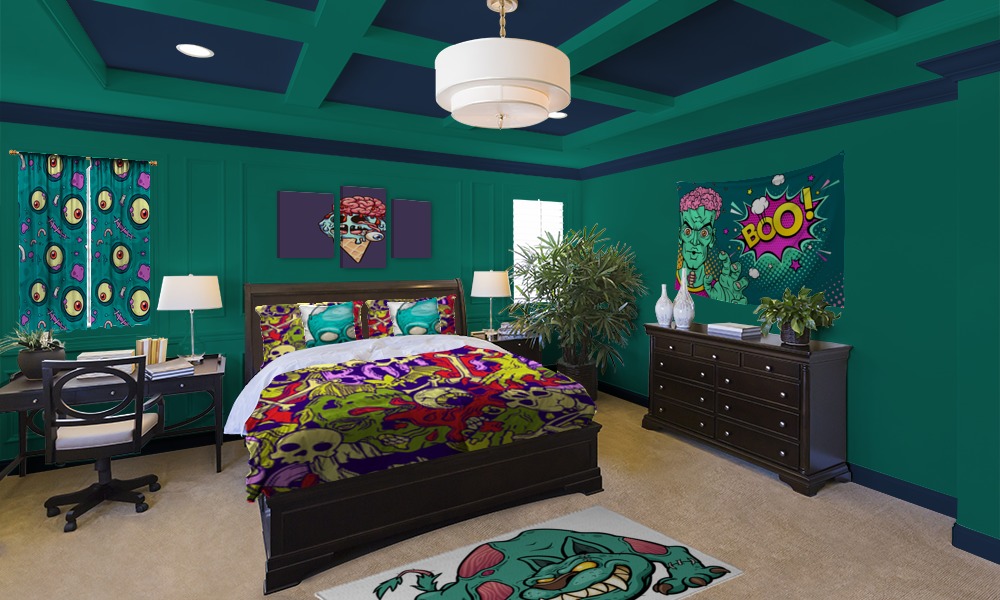 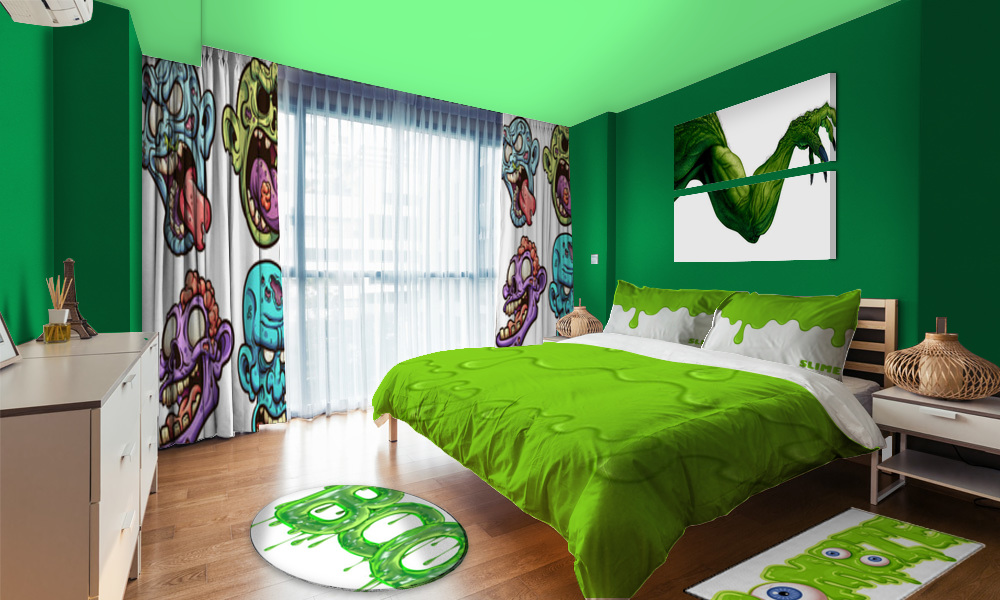 Green is another good color to utilize when creating a less night-terror-inducing room. The color is known for its emotional properties that stimulate positive feelings, and even better, it’s the color of slime and many zombie-like creatures like Frankenstein. Child-approved zombie decorations should always start with some shade of green for a spooky, but not overly scary zombie-themed room.

Among every group of fans are the ultimate admirers. For those who are ready to join the apocalypse army, every detail of these rooms will have you itching to go to war with these flesh-eating monsters.

This zombie arsenal is a necessary addition for any zombie-themed bedroom with a chance of surviving against the undead. Filled with guns and swords and decorated with the lower half of a leg on the front, this weapon storage is only for serious zombie fans. 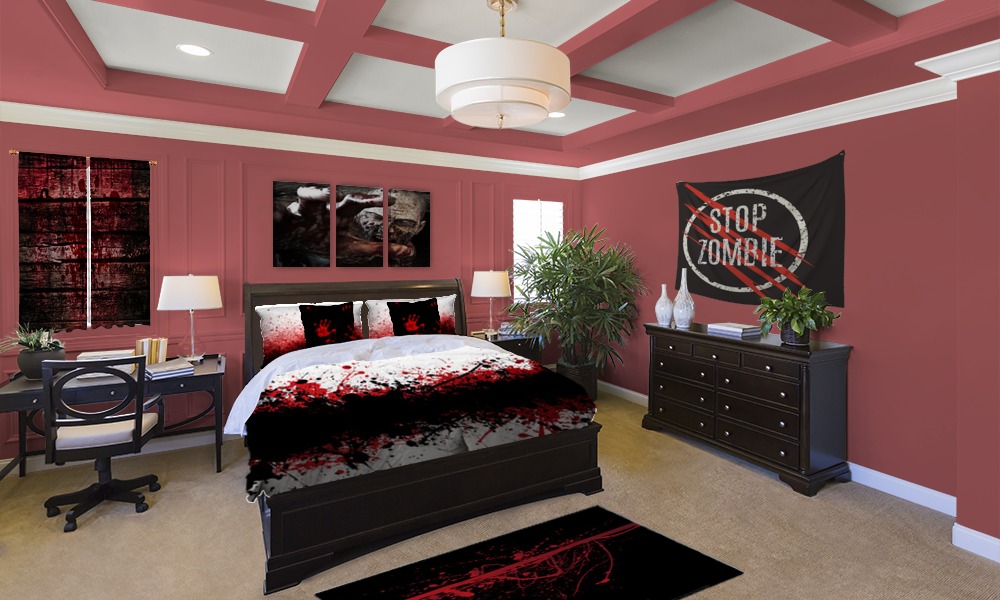 Spatters of blood everywhere and boarded up windows, these zombie-themed decorations are so real they almost had us fooled. The “stop zombie” mural is so realistic it could be used as a real warning sign when the monsters wage their war. However, what really puts this room at the top is the zombie wall art that portrays the monster reaching out to grab something. You can only hope it isn’t you that he gets a hold of. 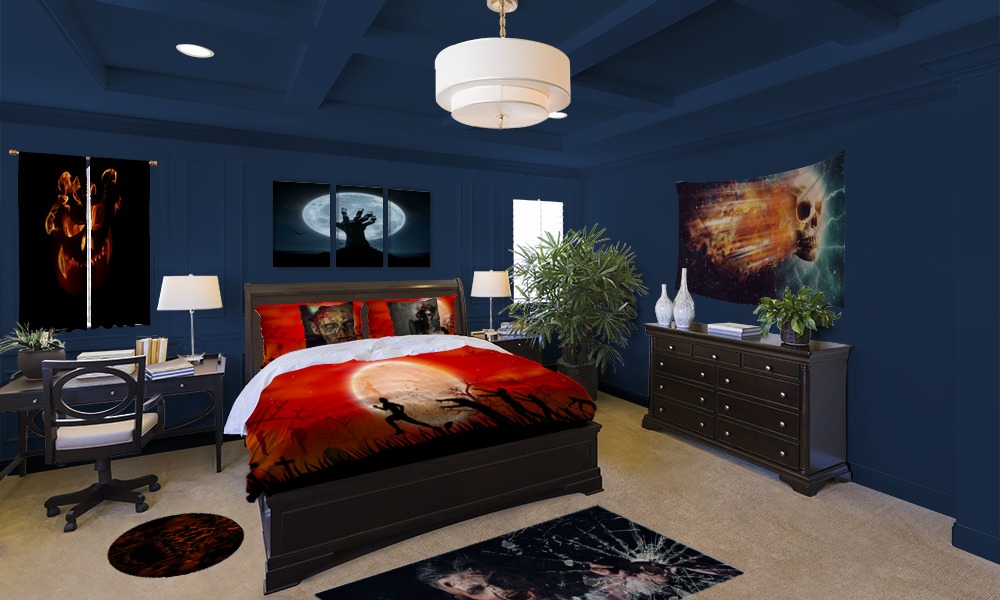 This zombie bedding starts off the decorations with a portrayal of someone running from the corpses by moonlight. The theme is continued up the wall to a piece of art that shows a hand reaching up out of the ground. Unique and creative use of light around the skulls in the room, this is room even the bravest zombie fans would choose over a real graveyard at nightfall.

An attack-ready bunker with a top level for lookout, this creative bed frame is a fun way to prepare for the night that real defense is needed. A spooky touch, the warning sign hangs right on the outside for everyone to see.

Making your own room survival ready

The end is near, so it’s time to take our tips and inspiration and get to work on your own zombie-themed bedroom. 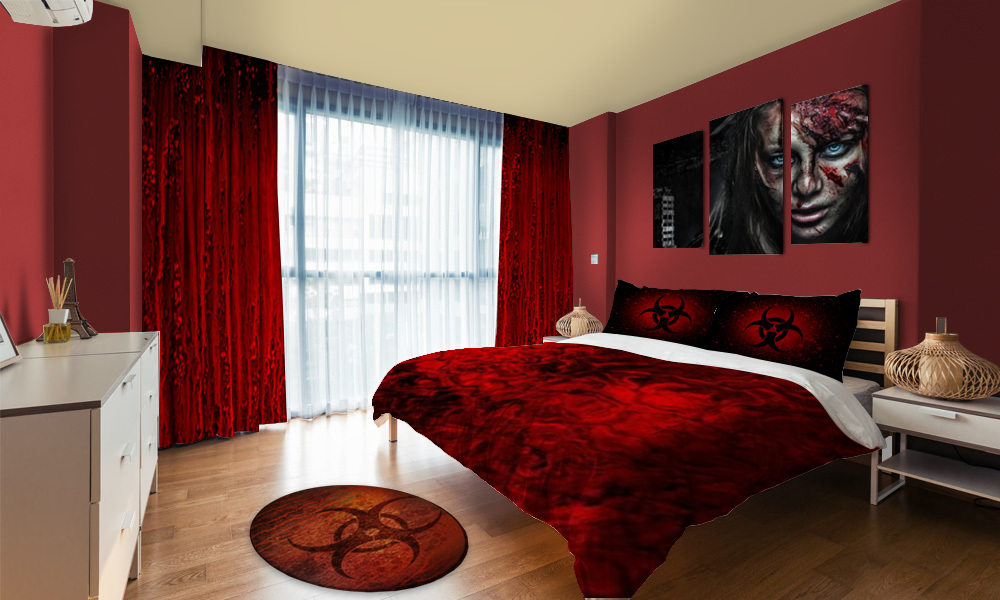 If you’re a true zombie fan, create a room that shows off the killer corpses and everything associated with them! Brains, blood, and limbs on decor is an easy start to making a room that is made for apocalypse junkies. Will you survive the flesh-eaters invasion? 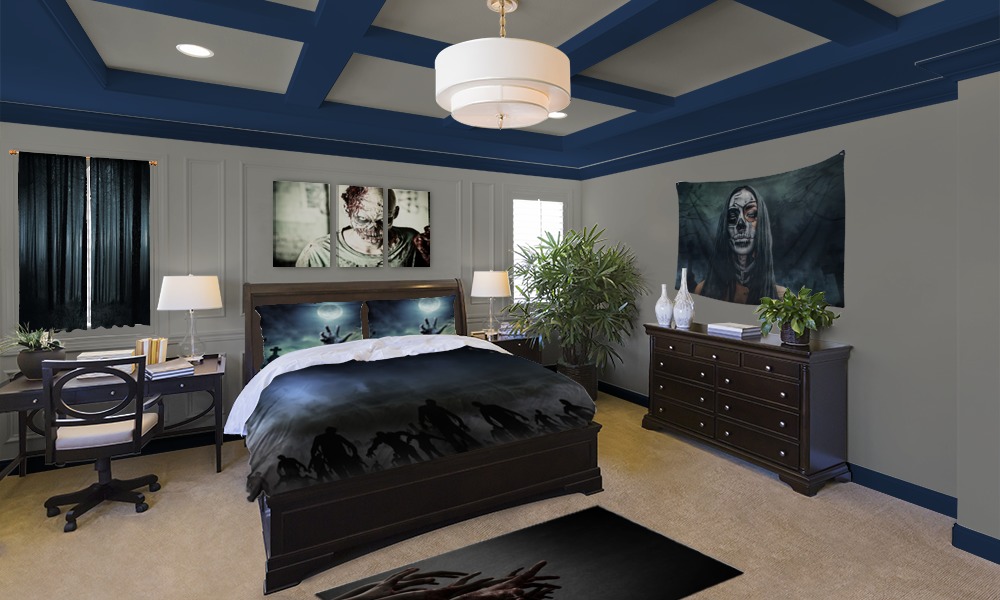 Click on this link to view our Gothic Bedroom collection.